Howdy Y'all, since last we spoke much has transpired. Yet nothing quite as immense as the communique I received just last week from the deepest, darkest recesses of Uranus. Our interstellar friend and ally Toftorg Golshop, (Ruler of Third Empire of Uranus), reached out to us here at the Sawdust City Brewery and let us know of his plans to return once again to our small corner of the Milky Way.

The message, which traveled across the vast expanse of space, took over two weeks to reach us.  In it Toftorg indicated that he had left Uranus with his personal convoy on another mission to Earth. Travelling at their vessels top speed, the 2.56 billion km trip should take him roughly one month to reach our planet. We expect him to land at his predetermined coordinates sometime around the 13th of February.

Along with his plans to once again visit Earth, the message from Toftorg also indicated that he was very much looking forward to procuring more of his favourite Earthly beverage, The Long, Dark Voyage to Uranus Uranal Imperial Stout. For since he last set foot on our planet, his personal stock of our luscious, dark liquid has all but vanished and he is in dire need of more. Designed to last the long, arduous voyage from Earth to Uranus, Long Dark Voyage is a Uranal Stout of the highest order and very rare outside of our home planet.

Within his message, Toftorg also mentioned that his ability to acquire any decent beer on his planet has for many eons been extremely difficult. In light of this information contained in his message, the timing of his return actually seems quite serendipitous, as it coincides with the estimated release of Long, Dark Voyage to Uranus at LCBO stores across in Ontario. 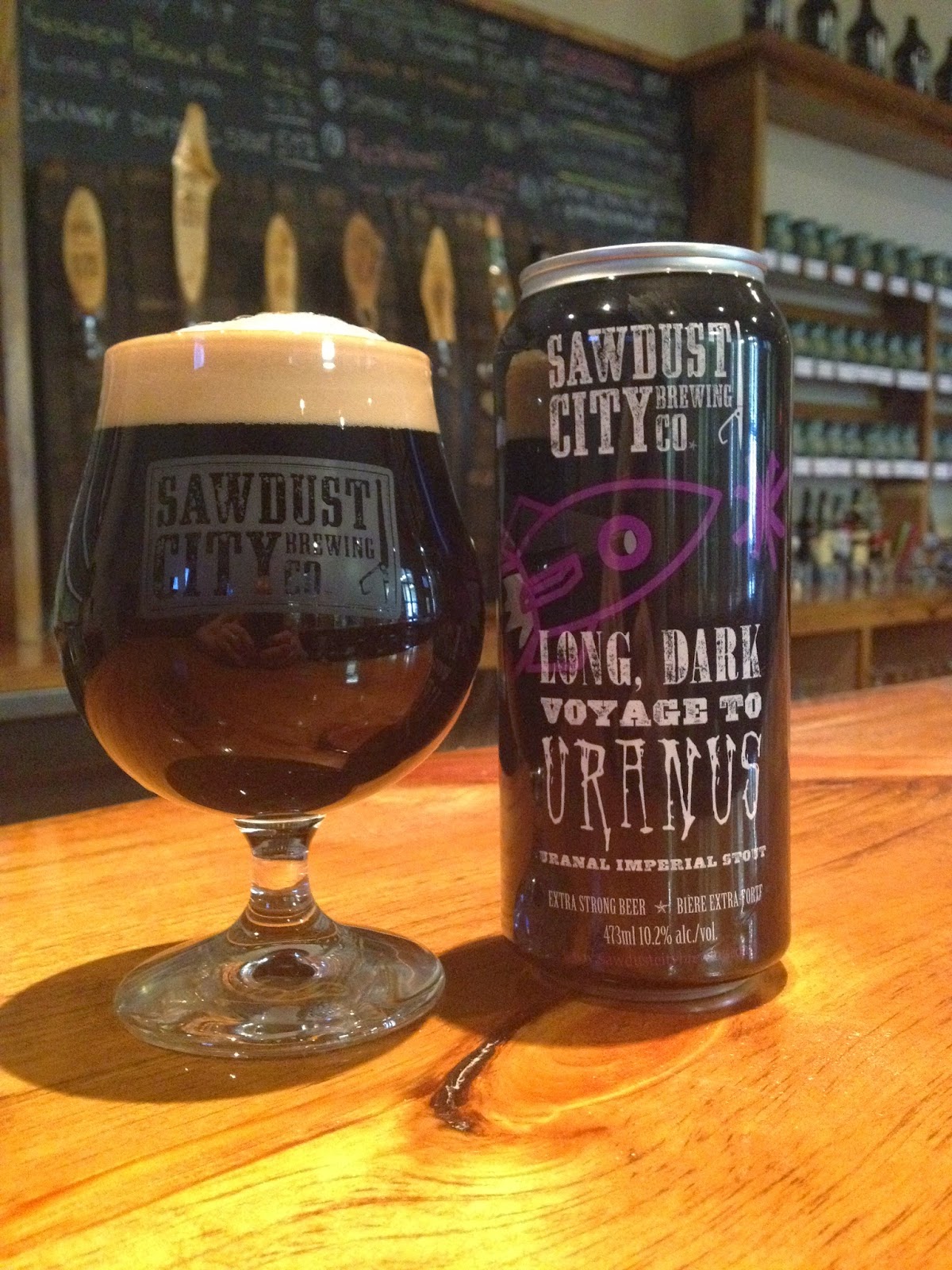 As Torforg goes on to tell us in his communication, the difficulty he and his fellow Uranians have in purchasing good beer stems from the fact that the only retail outlet able to sell beer on his home planet is run by a ruthless cabal called "The Ministry". Apparently, The Ministry which controls the distribution of beer on Uranus has made the purchase of any decent beer exceedingly difficult if not impossible for the average consumer. And although Toftorg is the Ruler of the Third Empire of Uranus, his title is mainly honorary and he holds very little political sway. He has to shop at the stores just like everyone else.

In his message he explains that The Ministry is owned and operated by three companies which are not of his home planet Uranus but actually hail from three separate moons circling the large gas giant. How they came to control beer distribution on his home planet was not discussed at length, but he did mention that it grew from an old agreement reached many years ago but had long since been considered out of date.

According to his message, these three moons mainly sell beer brewed on their respective moons at the stores on Uranus, with only a small amount of shelf space left to be filled by locally brewed Uranal beer. And as Toftorg states in his message, much of this "moon beer" is pallid and tasteless. He'd rather not drink anything that subject his tastes buds to their products. He longs for the rich, robust flavours of the beer he discovered here on Earth.

In the final paragraphs of his message, Toftorg told us he hopes to bring enough Long, Dark Voyage to Uranus back to his fellow Uranian people so that they too can see what a real beer tastes like.

We look forward to greeting Toftorg when his shuttle arrives next month and we hope to supply him with as much Long, Dark Voyage to Uranus as possible.  Our hearts go out to him and his fellow Uranian people as their plight is certainly one that we can understand. Hopefully their future brings forth change.

Anyhoo, that was one thing that happened...the other big news is that our newest release "Le Chandail De Skokie", a 8.5% Biere de Garde Ambree, is finally available in our on-site retail store and at kick ass beer bars across the province!  With a rich malt body, a spicy, yeasty aroma and a warming alcohol kick, Skokie is sure to be a crowd-pleaser.

And to kick off the release of Le Chandail de Skokie, Skokie himself stopped by the brewery. That's right, the otter himself popped by Sawdust City, not only to have a few sips of his namesake ale but also to announce that it will be the official beer of the 2015 Gravenhurst Winter Carvinal!  Don't believe us? Well, here's the proof... 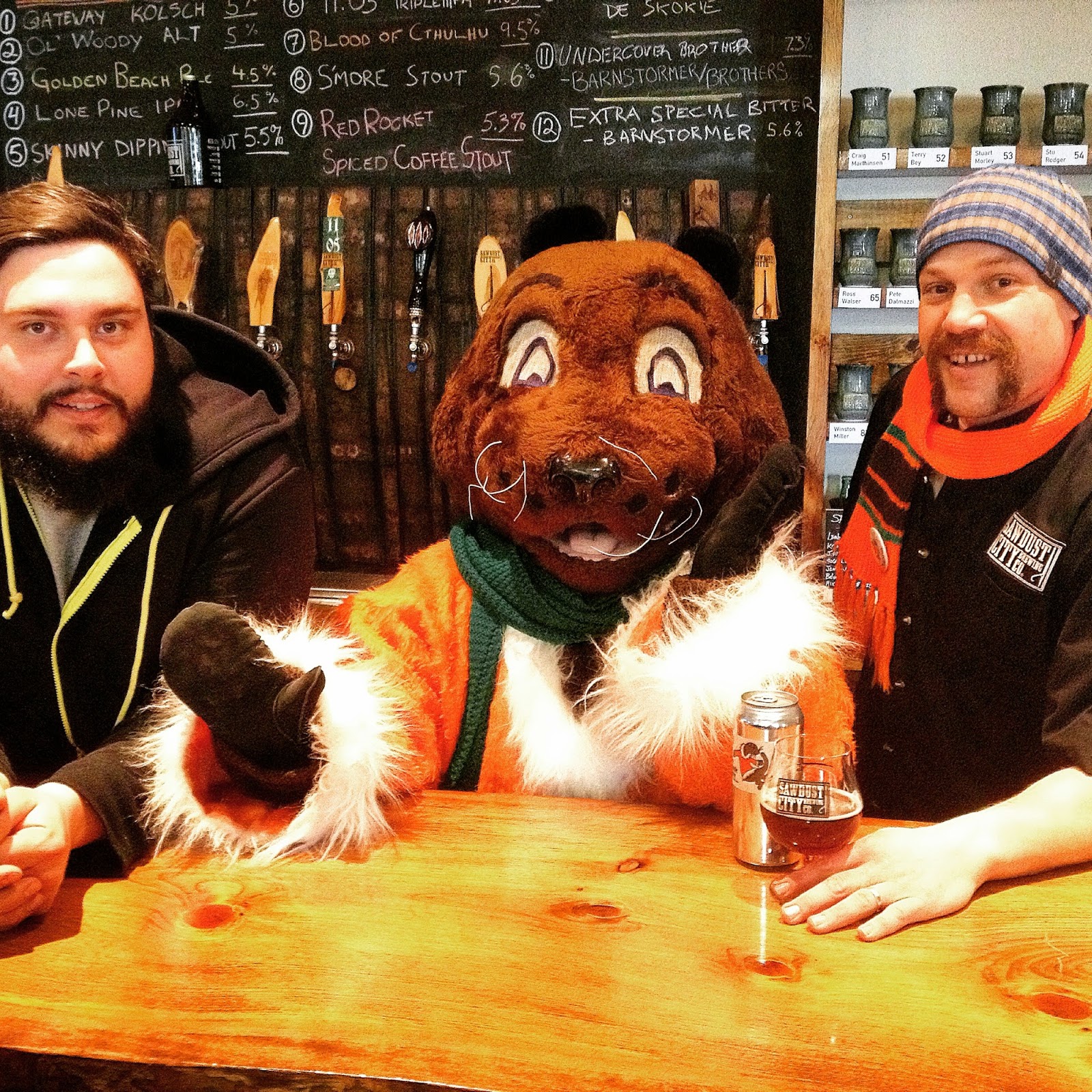 A charming fellow that Skokie.  Well, it goes without saying that we are extremely proud to be a part in this local event and hope to be apart of it for years to come!

So what else we got? Well, you'll be glad to hear that we got a few beers that should be coming out in the next month or so, an old favourite and a brand new beer!

First up, the old favourite.  The Princess & Girlpants Meet the ODB is just about ready to come out of the barrel and say hello to all y'all out there. This years version has been resting in Chardonnay wine barrels for 10 months. At 9.5%, this Barrel Aged Belgian Golden is tastin' great and should be canned and ready to go by mid to late February. And again, in our attempt to bring you a more traditional beer experience, much like our Saison de la Maison series, we will be employing our "canned conditioned" technique for this release as well.  Fruity aromas of peach and apples, intermingle with notes of sweet white wine and oak. A taste experience you won't soon forget.

You'll be able to pick up cans in our retail store and find it on draught at kick ass beer bars across the province around the same time.  It's been a while since we last saw the ODB, so here's an old version of the label. We still got to make a few changes, but have a look see... 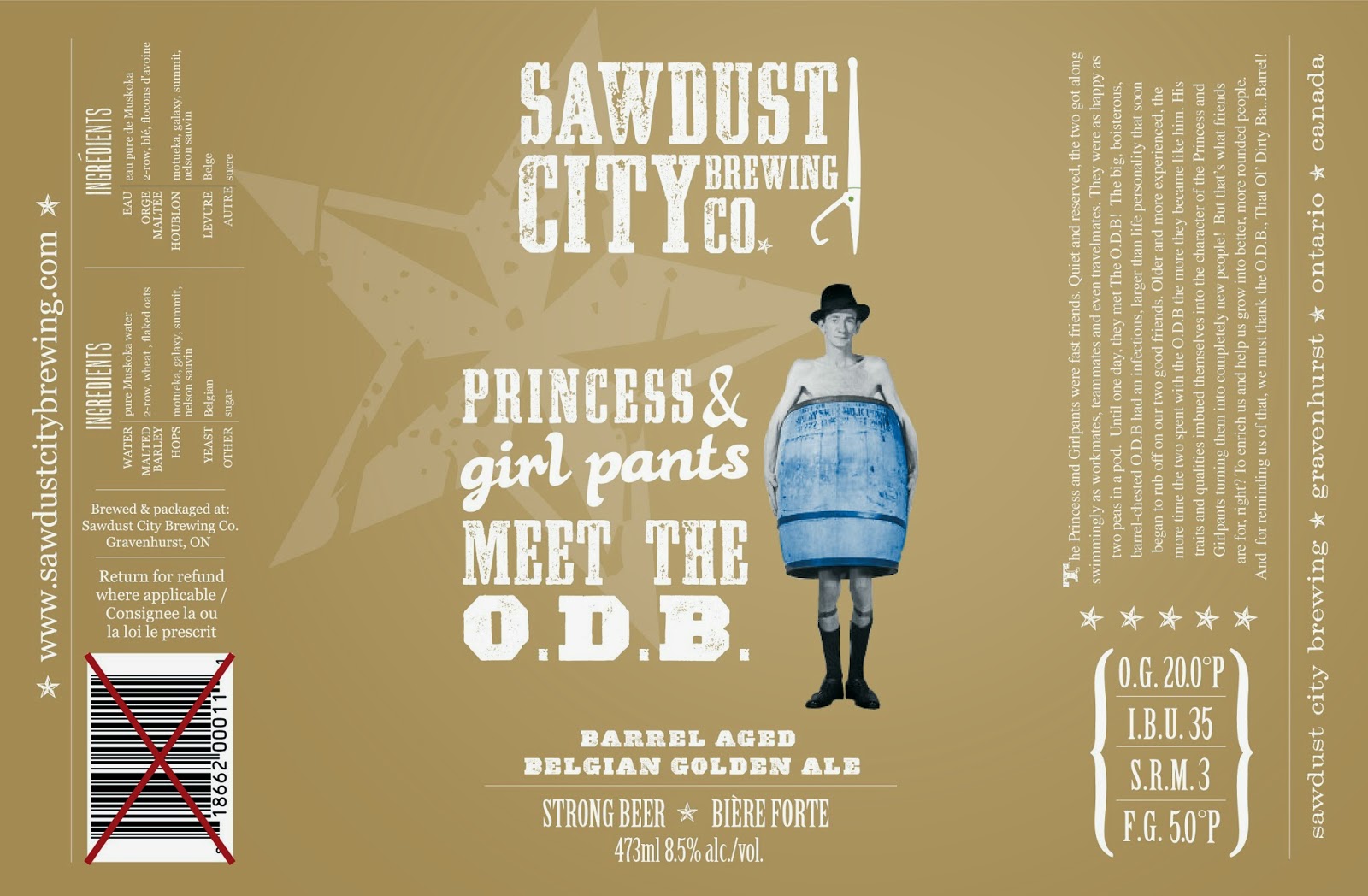 Now for the new beer...Twin Pine IIPA. That's right folks, we're finally brewing a double IPA!
Now as you know, we've had the Lone Pine IPA kickin' around for quite some time and dang if we didn't skip right to the triple IPA with this years release of 11.05.  But now we've decided to take a step "back" and finally release a double IPA.

Outside of the obvious reason that our double IPA would be called Twin Pine (twice the Lone Pine), there is a more...let's say, obscure reason we elected to dub this brew Twin Pine. Ya see, it's a nod to one of our favourite classic 80's Sci-Fi pics, "Back to the Future".

For all y'all not so up to date with the Back to the Future lore, here's the story of the Twin Pine. So, as you may or may not be aware, when Marty McFly (Michael J Fox's character) meets Doc Brown (Christopher Lloyd's character) before his first trip back in time, they meet in the parking lot of the Twin Pine Mall. When Marty travels back in time he accidentally runs over one of the trees that the mall is named after.  Upon his return to the future, the mall is now known as Lone Pine Mall. See what we did there?  Take a look at the photo evidence... 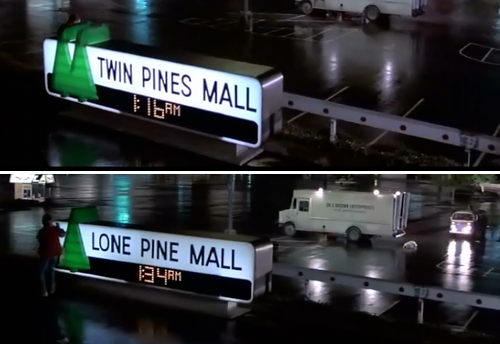 Anyhoo, Twin Pine IIPA is of course going to be an excessively hopped ale bursting with the over the top hop aromas and flavours you've come to expect from Sawdust City. The plan is to have it come in around 8.8% ABV and 88 IBUs.  We will also be brewing this beer for the first time when we brew our 88th brew on the Sawdust City system. We maybe letting our geek flag fly a little here, but dang it, we are what we are!

Look for Twin Pine IIPA to be hittin' our retail store early to mid February and again, them same kick ass beer bars across the province should be carryin' it around the same time.

Anyhoo, that's just aboot it for now. Until next time, keep the beer in your mug and the sawdust beneath your feet.