The Evolution of a Brewhouse Floor

Howdy Y'all! So maybe some of you good folks out there on the information superhighway have been poppin' by our Facebook, Twitter and Instagram pages and following our progress here in Sawdust City. I've been doin' my darndest to keep all y'all informed and up to date on how the build out at our little brewery is goin'. I know, I know, y'all are pretty busy, so maybe you missed a few of my (probably) too frequent updates, that's okay, I totally understand. But now, as our brand spankin' new floors are finally nearin' completion, I thought I'd give y'all a little pictorial tutorial on the evolution of thems floors.
So sit back and enjoy as I take you through each step in the evolution of our floors. From the very beginning, as our floors took those first steps and crawled outta the primordial dirt and went from a mere hole in the ground to a purdy shiny red technological marvel!  Alright, I maybe slightly over sellin' it, but like I've said before...it's my blog, so deal with it!

Here is our hole as it looked in the beginning 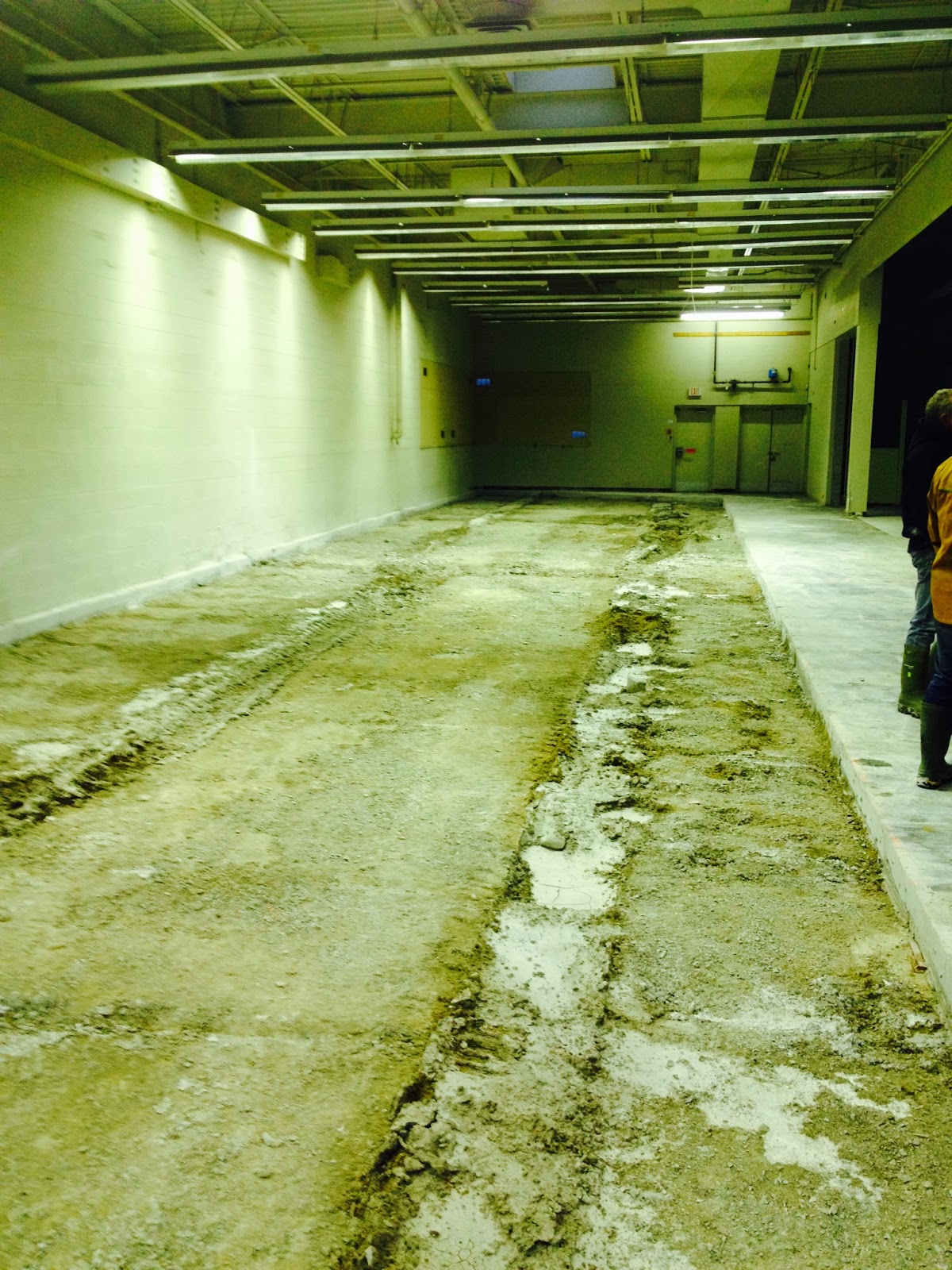 Not much more than a simple hole in the ground. In order to have a stronger base and to hold the weight of all our tanks (and the weight of those tanks full of beer!) we needed to scrape the dirt down a few inches and then compact the earth. Here's the back hoe scrapping down those precious few inches. 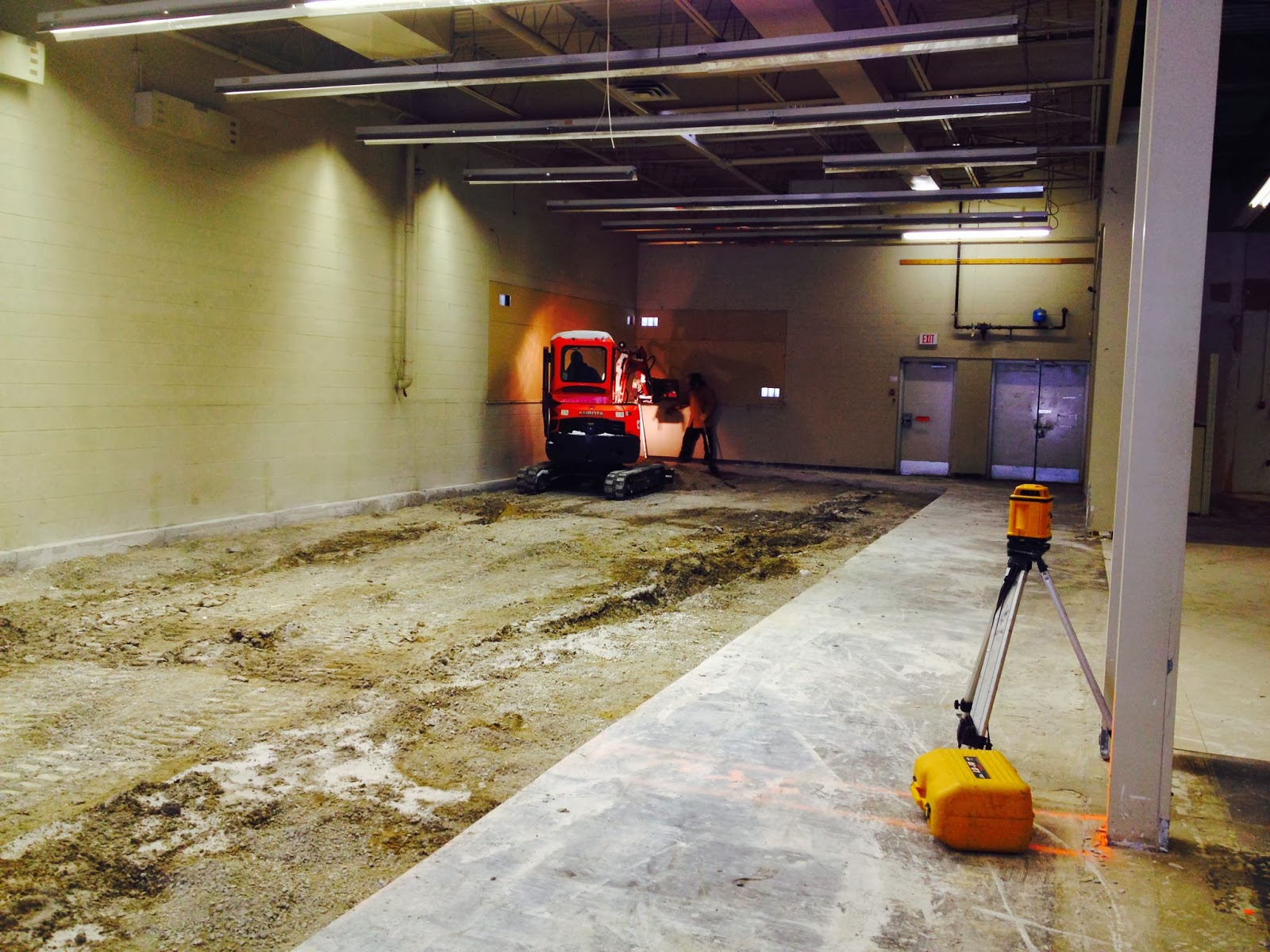 Once the earth was scrapped down, sprayed with water and then compacted with a giant "stamper" machine, rebar was fitted and the trench outlines were made.  The scraped down floor was also "sloped" so that once the concrete was poured, it would leave us with a gently sloped floor leading towards the drain for easy clean up of our brewhouse and cellar floors. 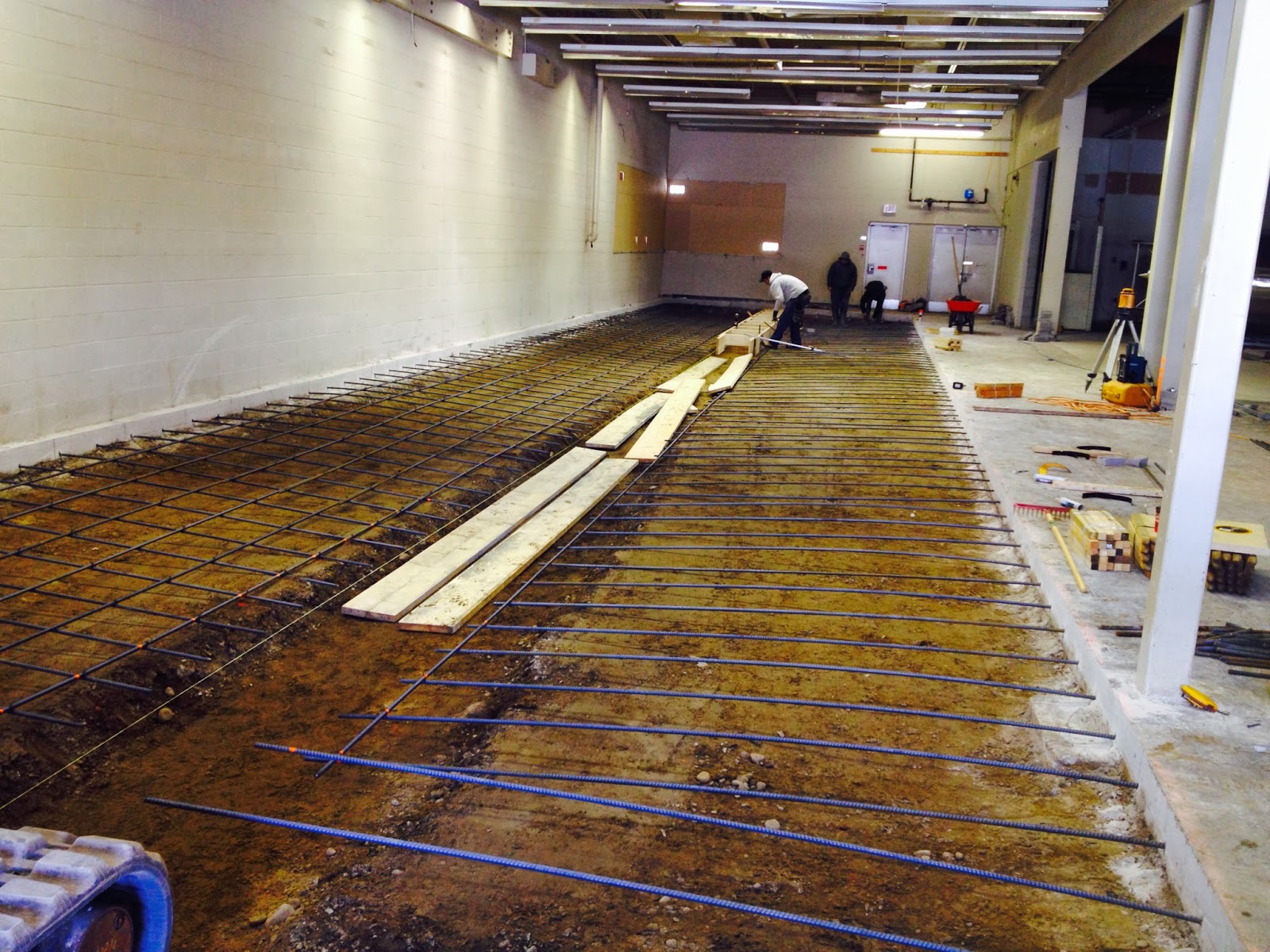 After all the rebar was in and the trench drains were outlined it was time to start pouring concrete. 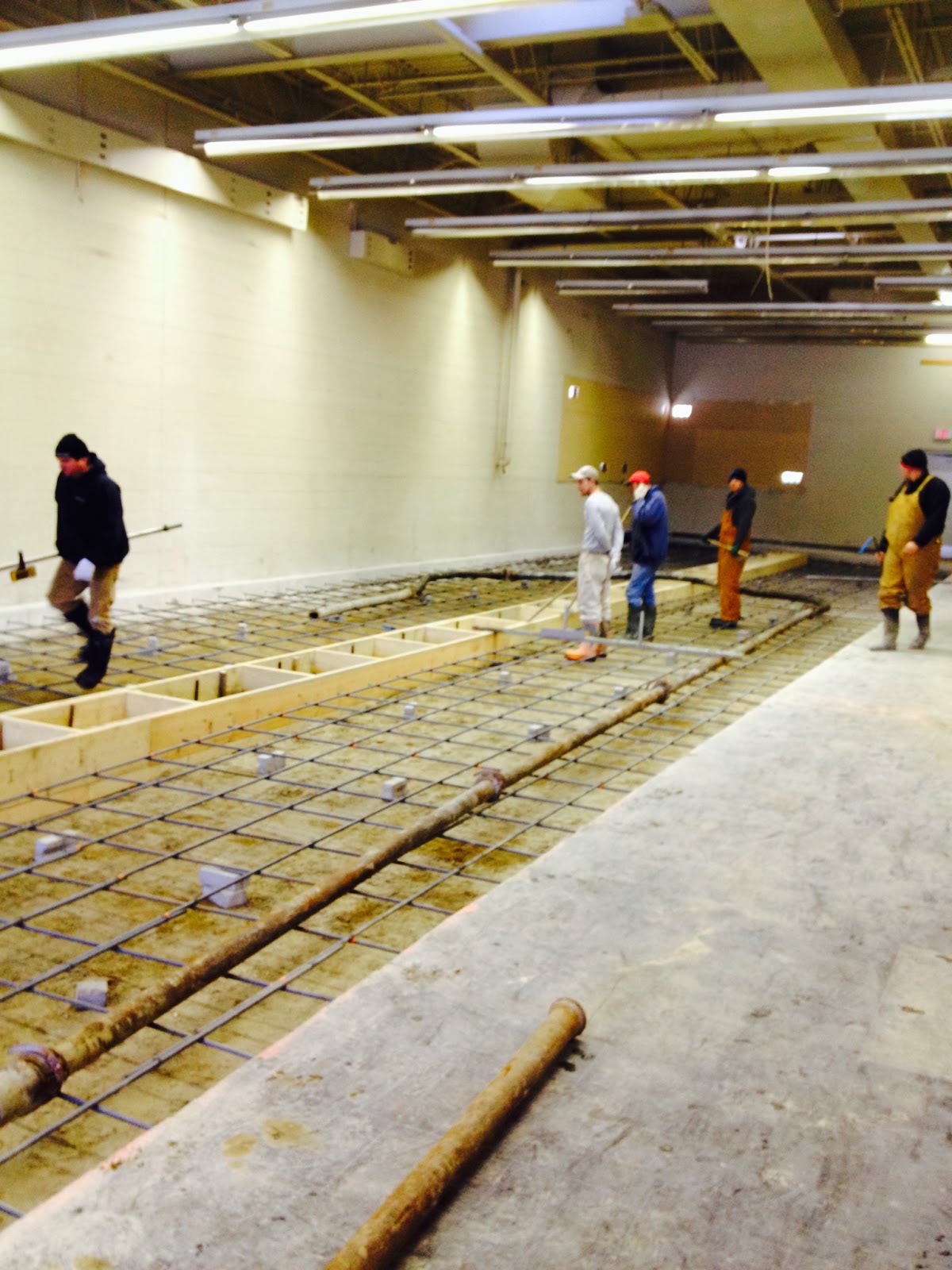 Here are a few shots of the first few pours of cement... 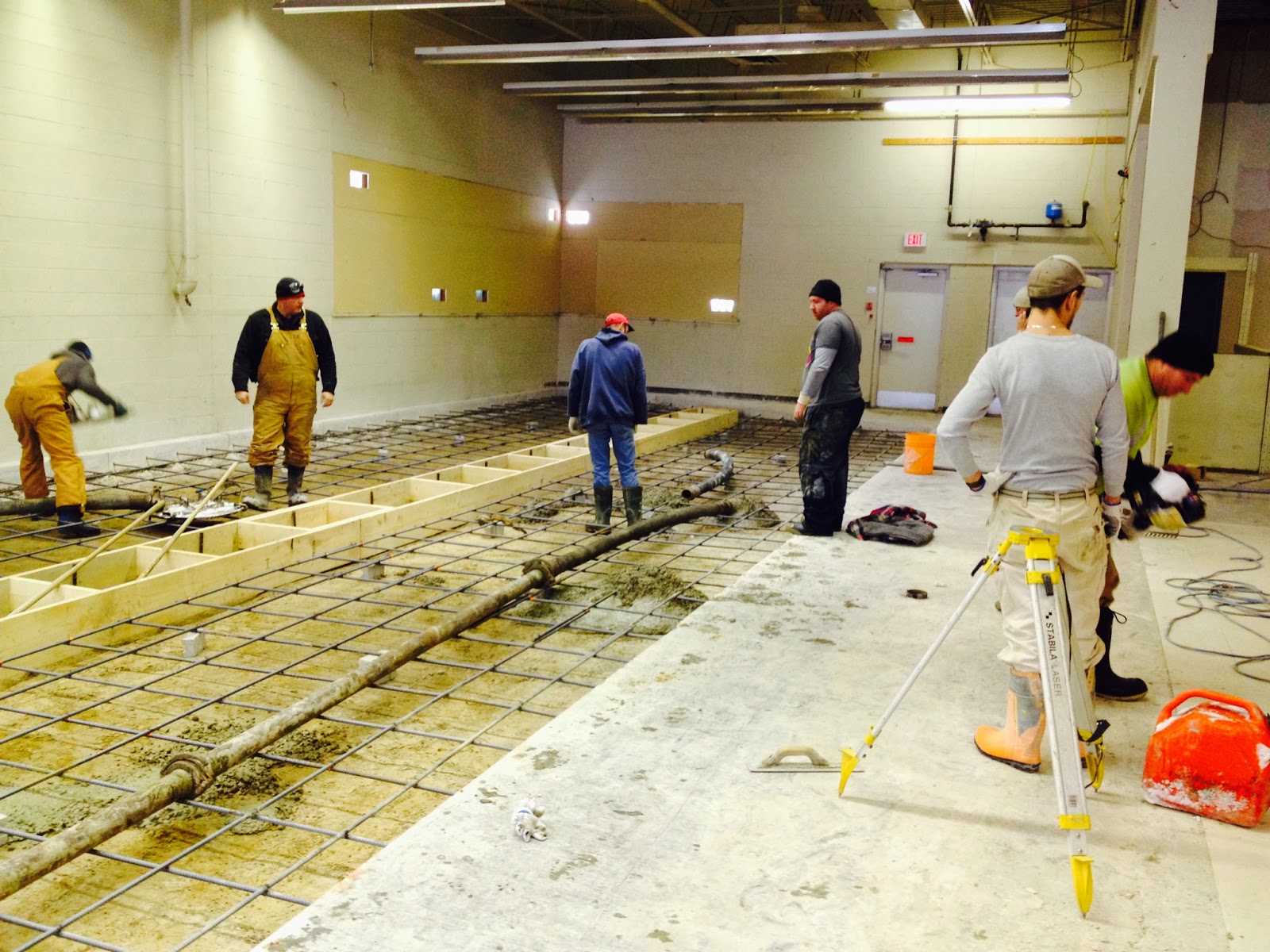 It doesn't look like much now, but this ugly puddle off goo is gonna turn in fantastic lookin' floor! 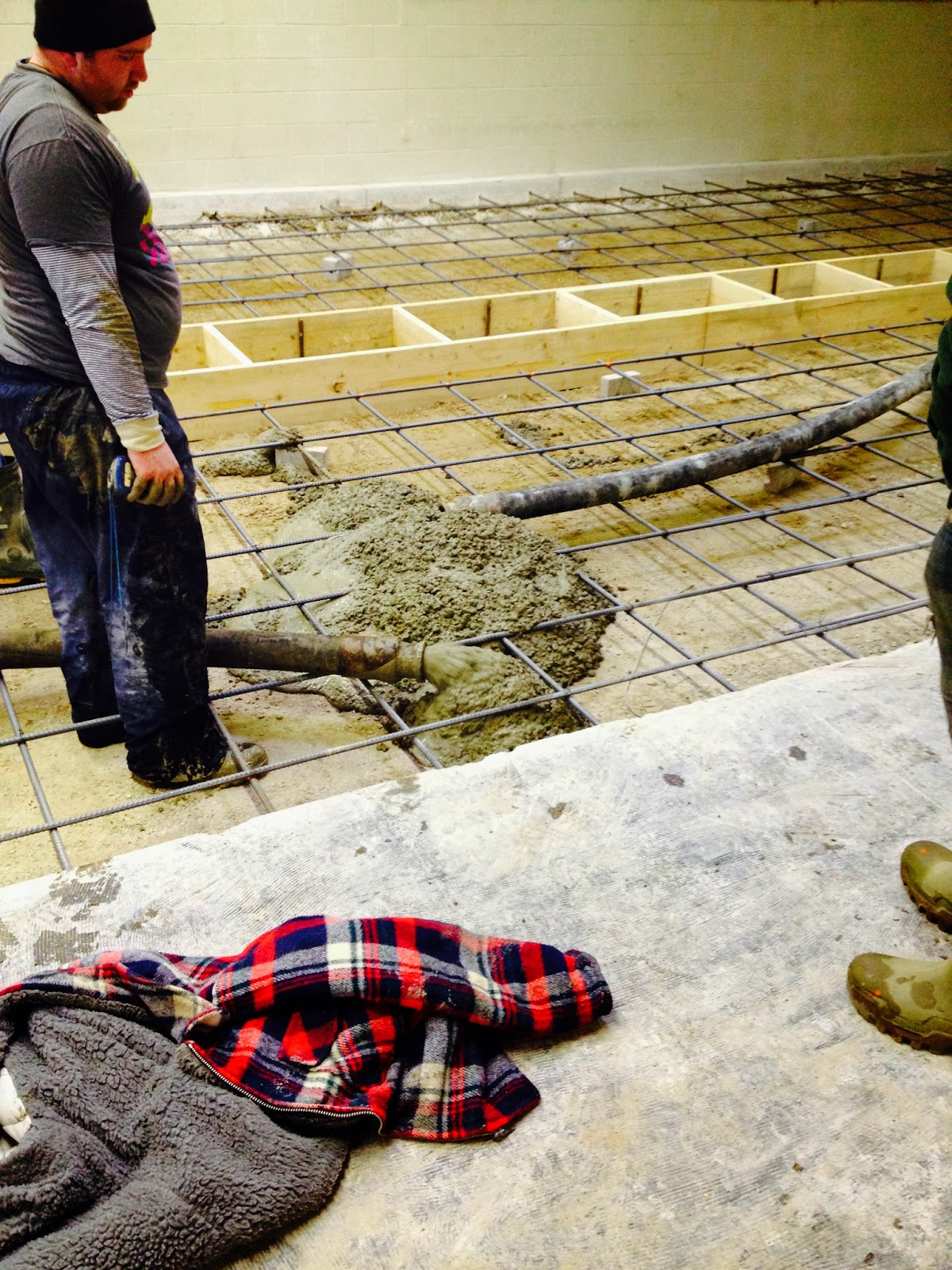 One day after that mess of cement was poured...ta da! Here was our newly formed floors with the outlines for our trench drains. 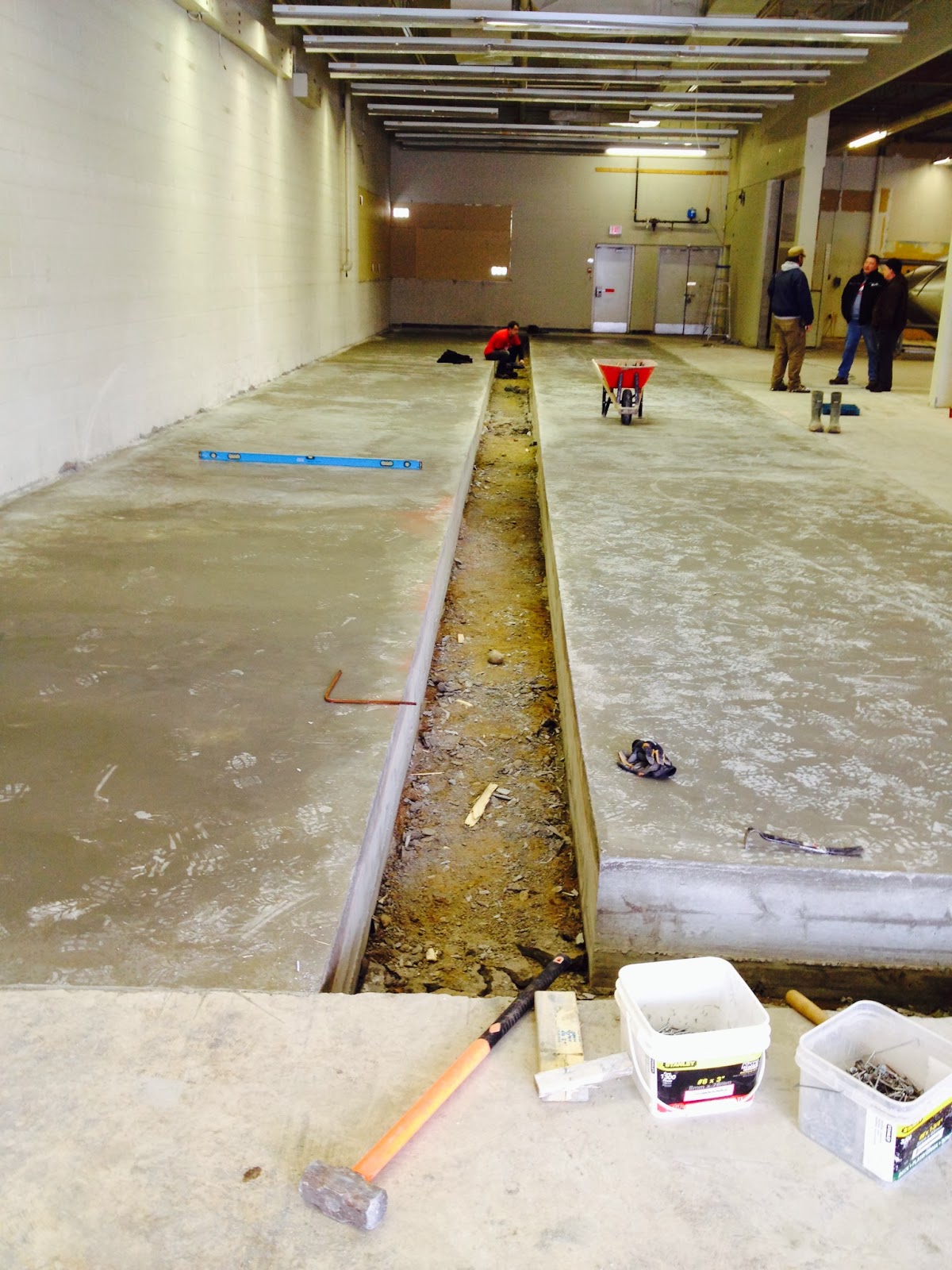 If you look closely, you can see little pieces of rebar that have been bent and cut off. They are sitting on the edge of the trench. More on that later... 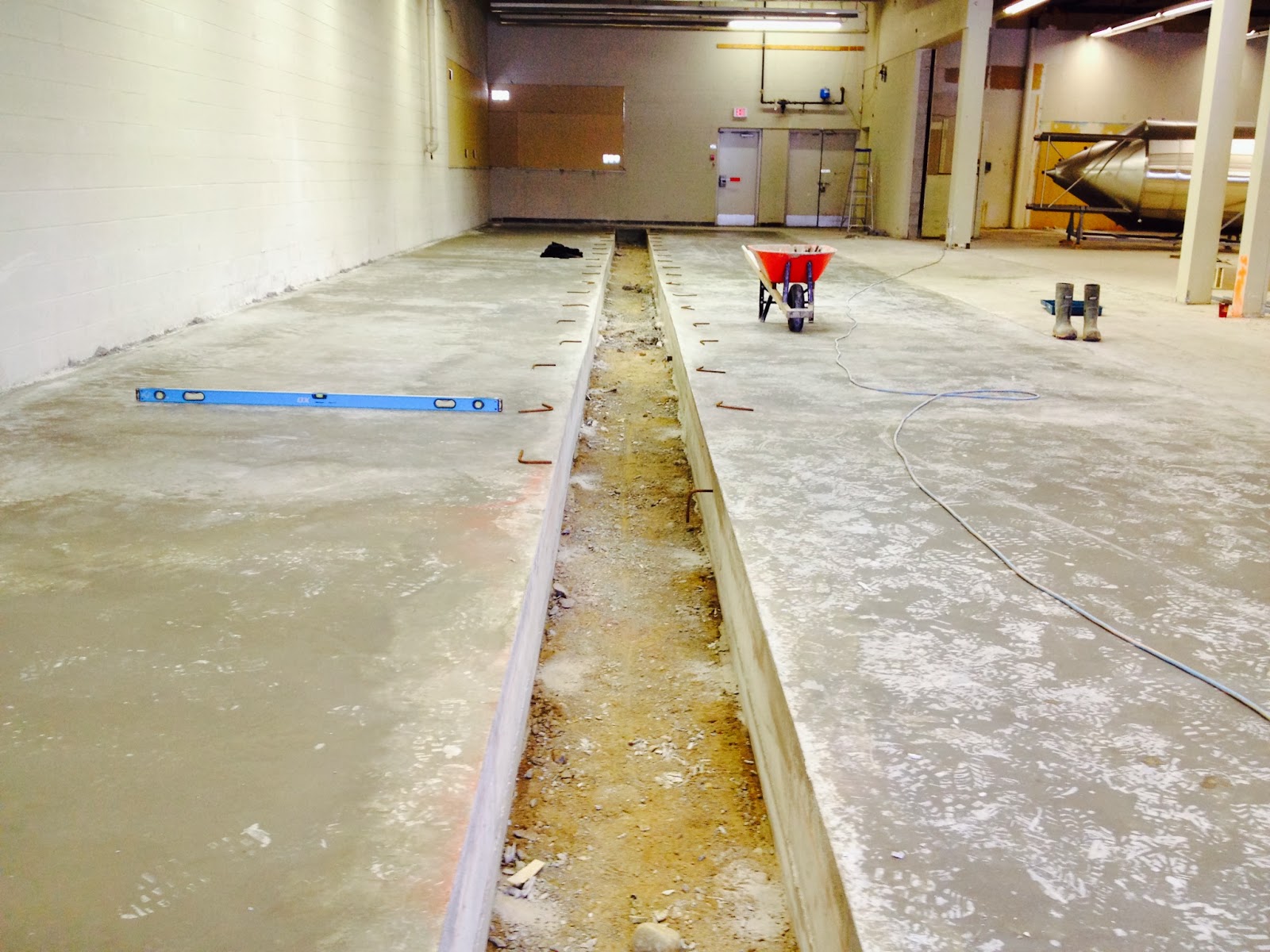 Here we see the floors being cut with a giant saw to release excess pressure and to stop cracks from forming. He used the saw to cut a number of incisions in the concrete from one end of the slab to the other. These small cuts will be filled with the epoxy later. 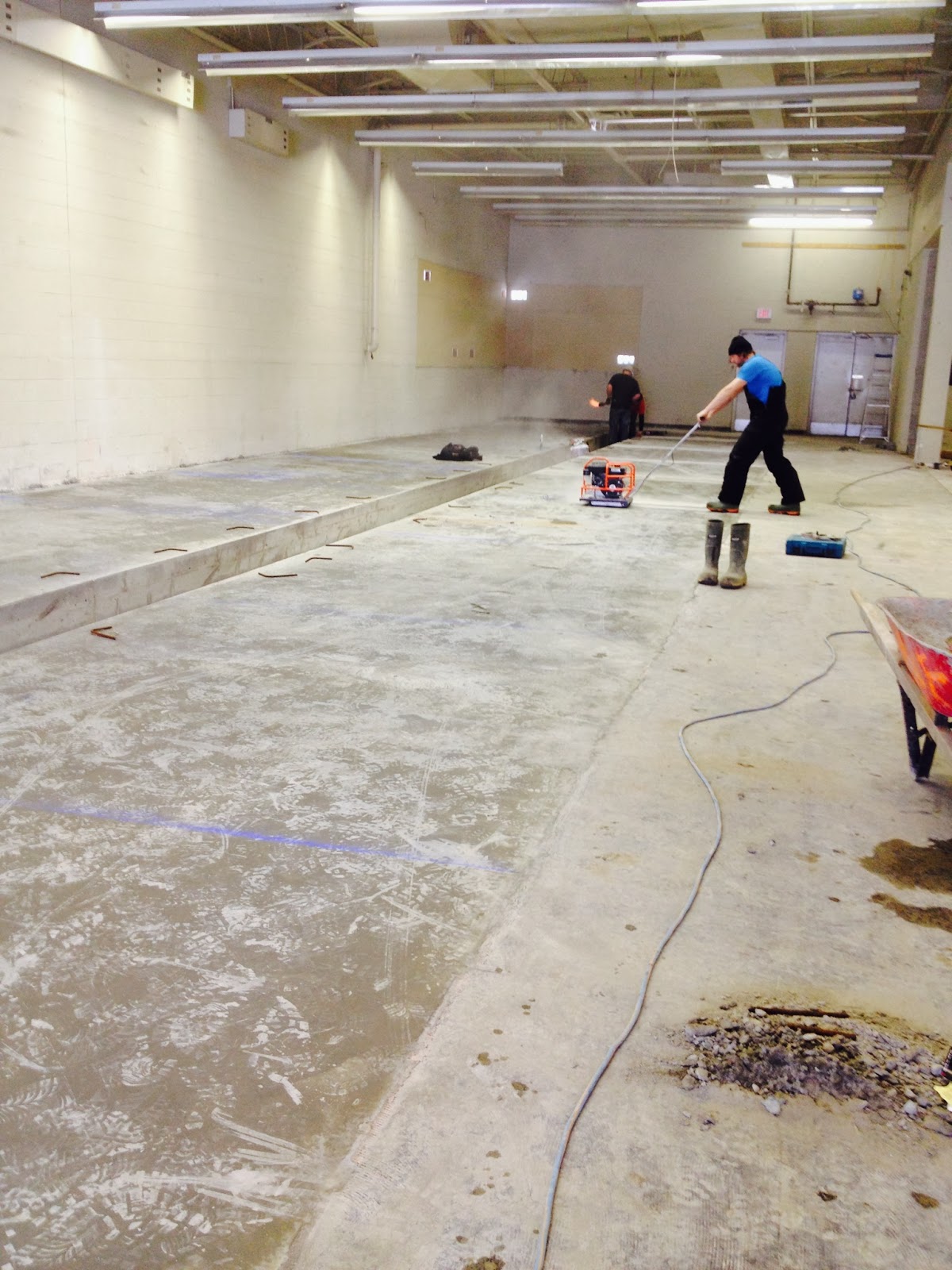 As the floors were being cut, these guys are taking those pieces of rebar and reattaching them through out the trench... 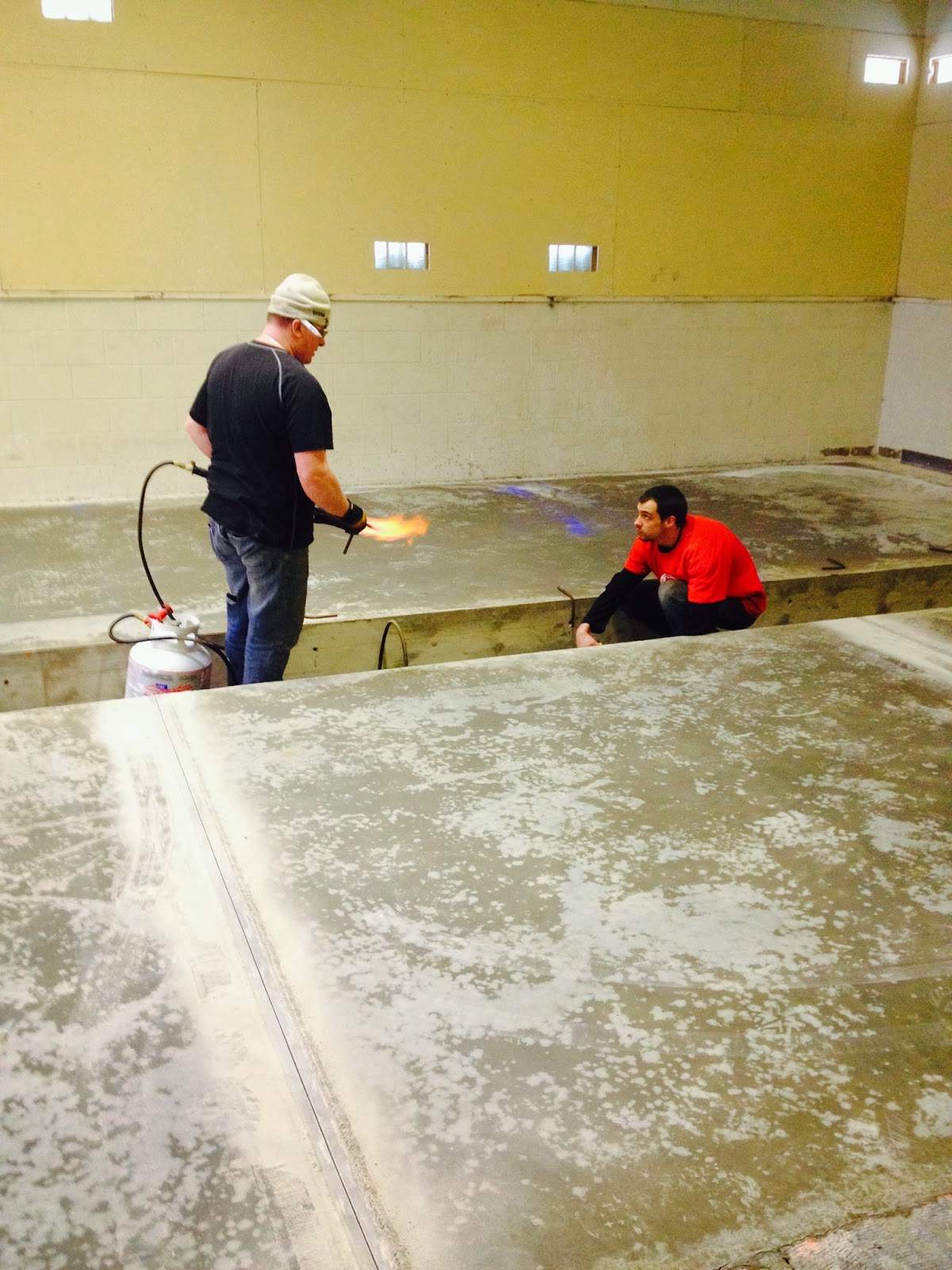 ...which looked like this, after they have been reattached. 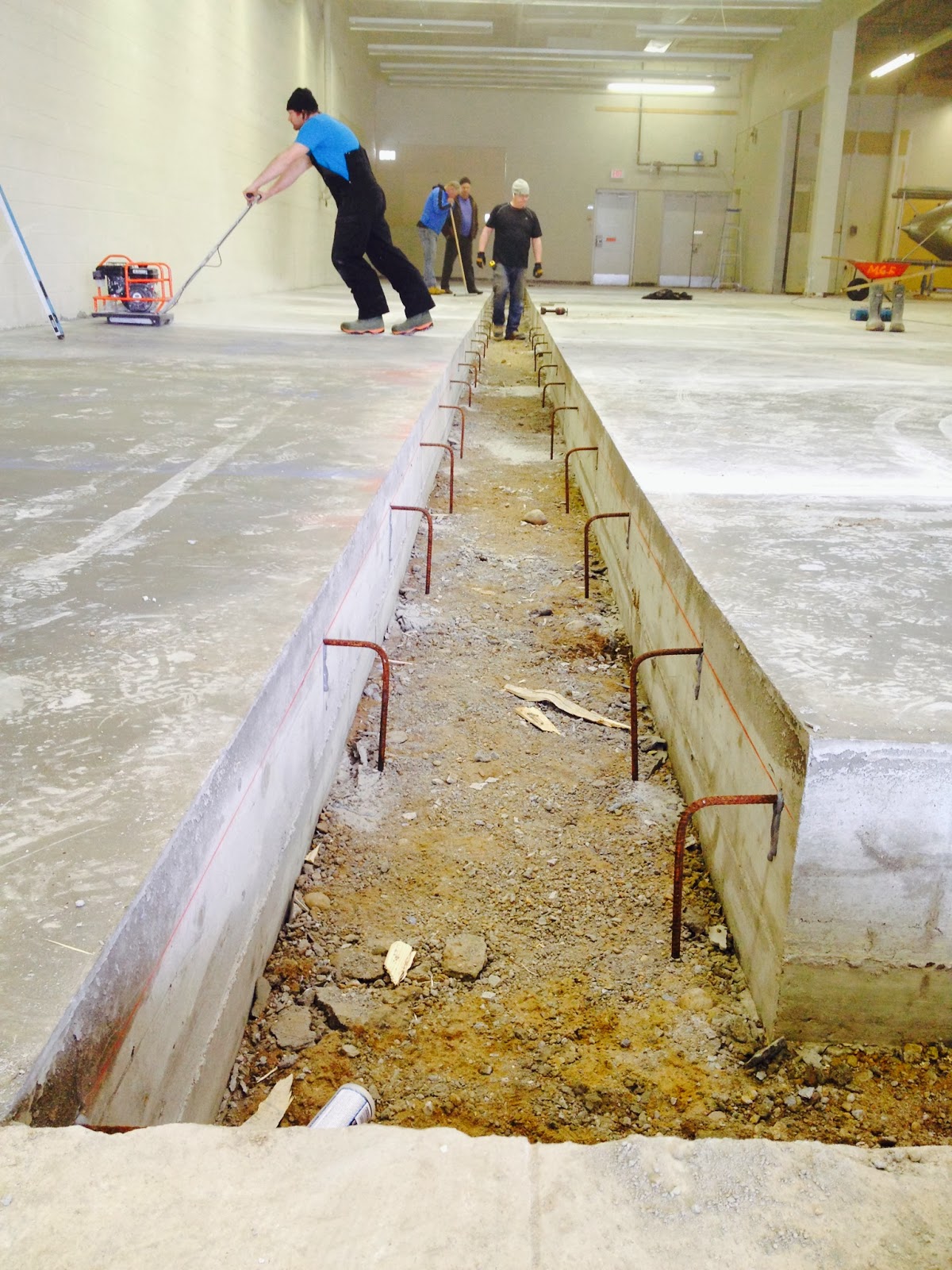 From there, wood was cut and then put in place to create trench forms for our brewhouse and cellar trench drain. 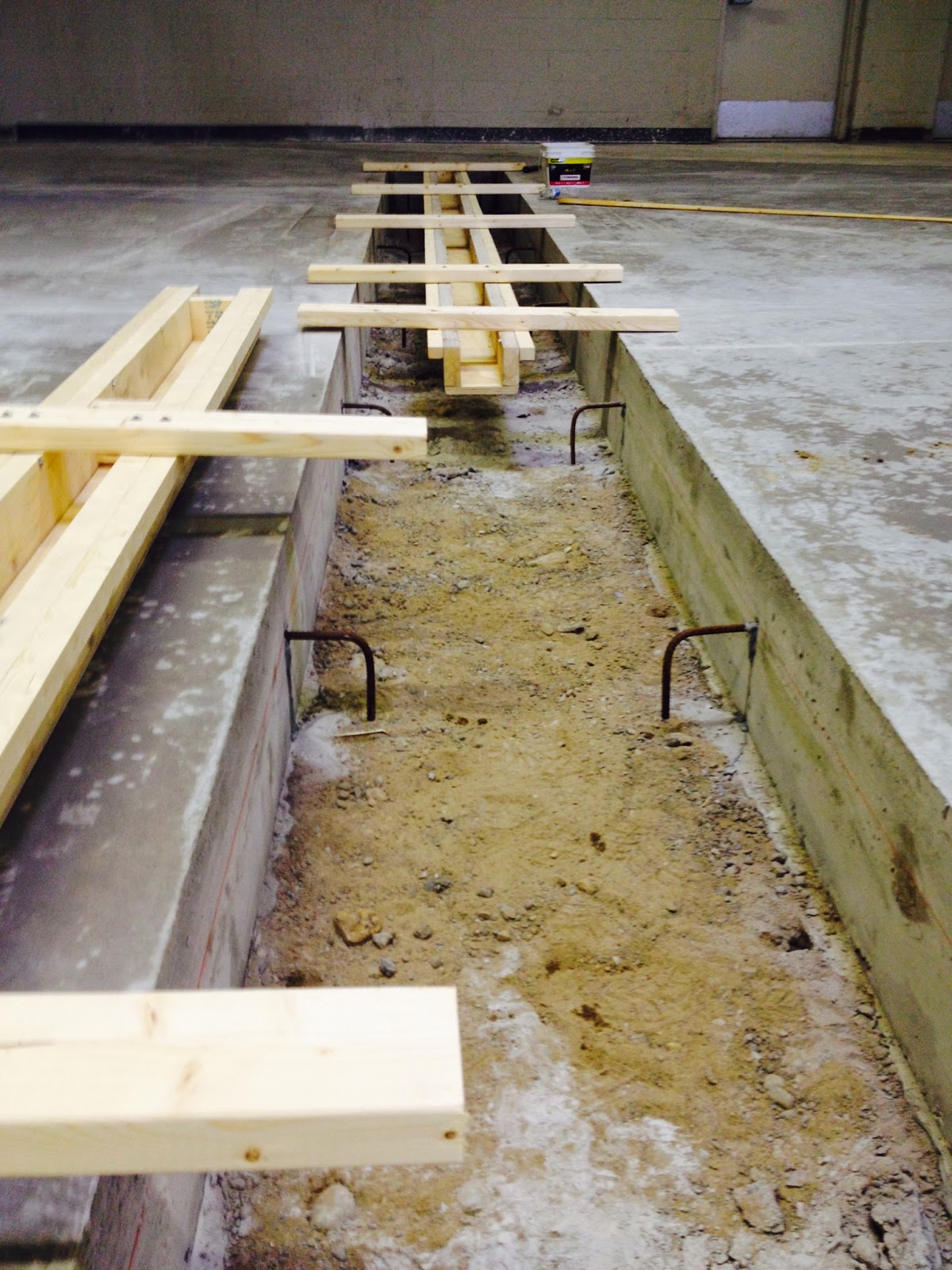 Here is what it looks like with after all the trench forms are in and the drain attached. 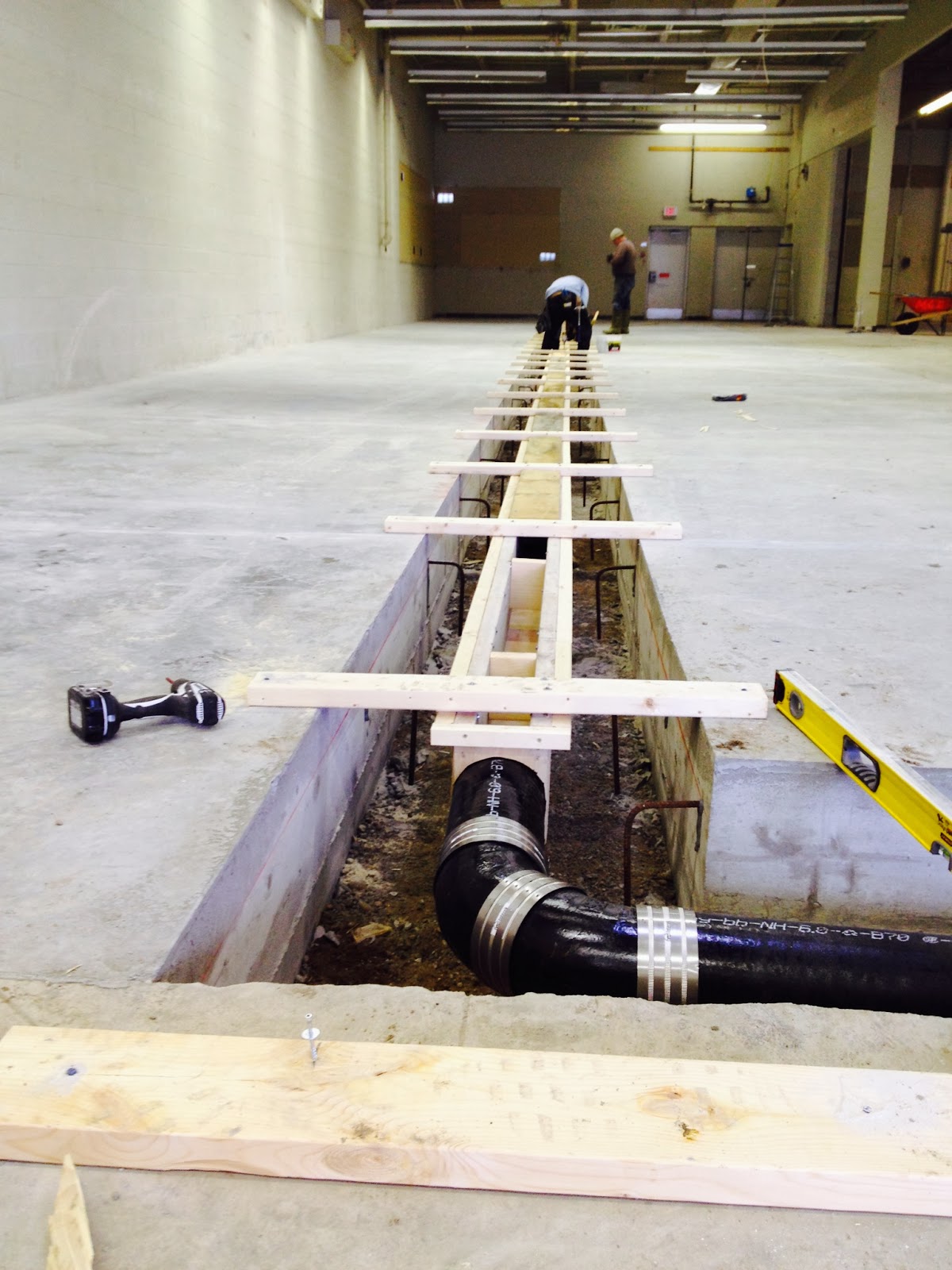 After everything was in place, it was time again to pour more concrete. This last pour will go around the trench form, leaving us with our completed trench drain. 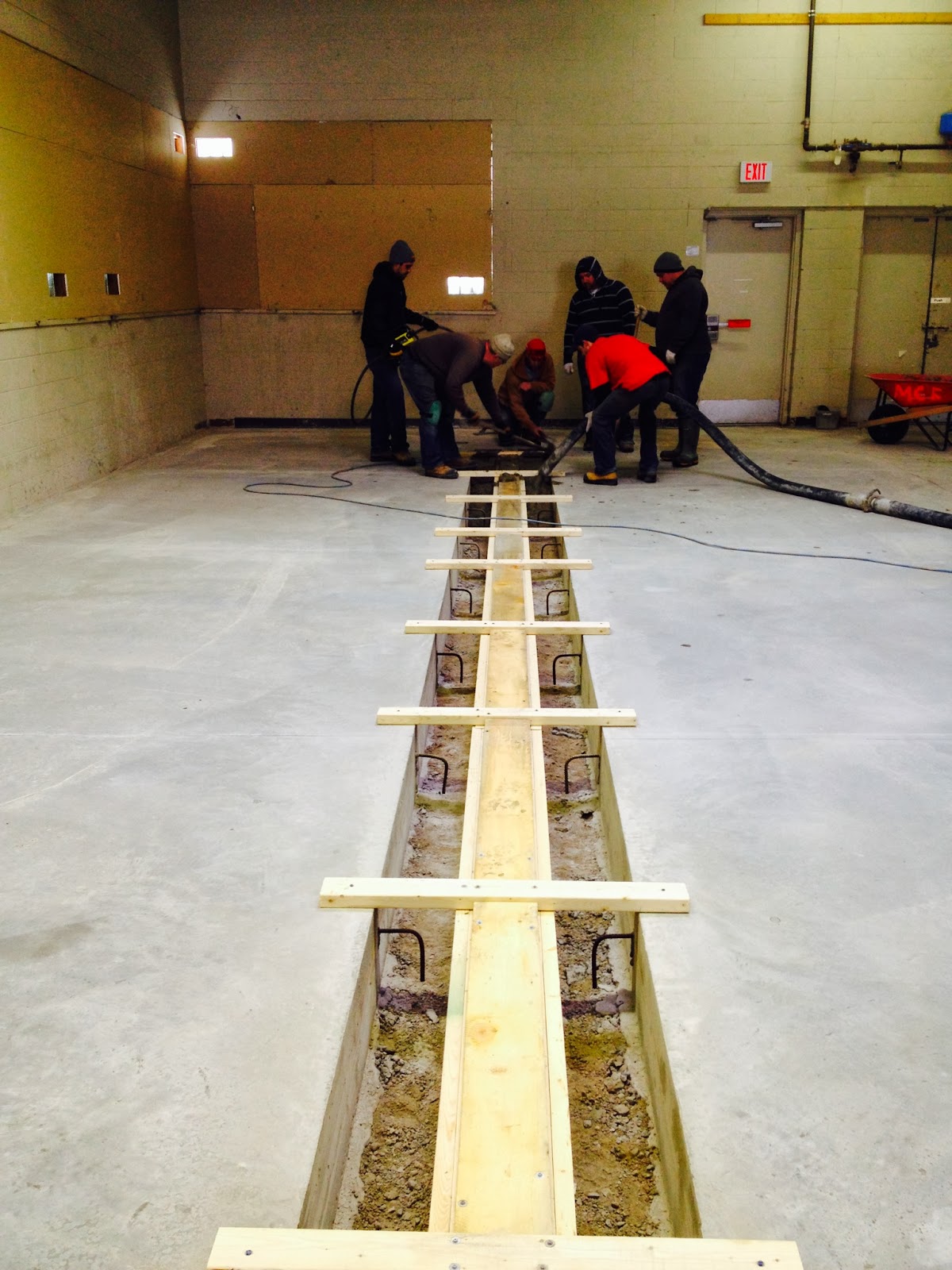 The next day after the cement had dried, the trench forms needed to be removed... 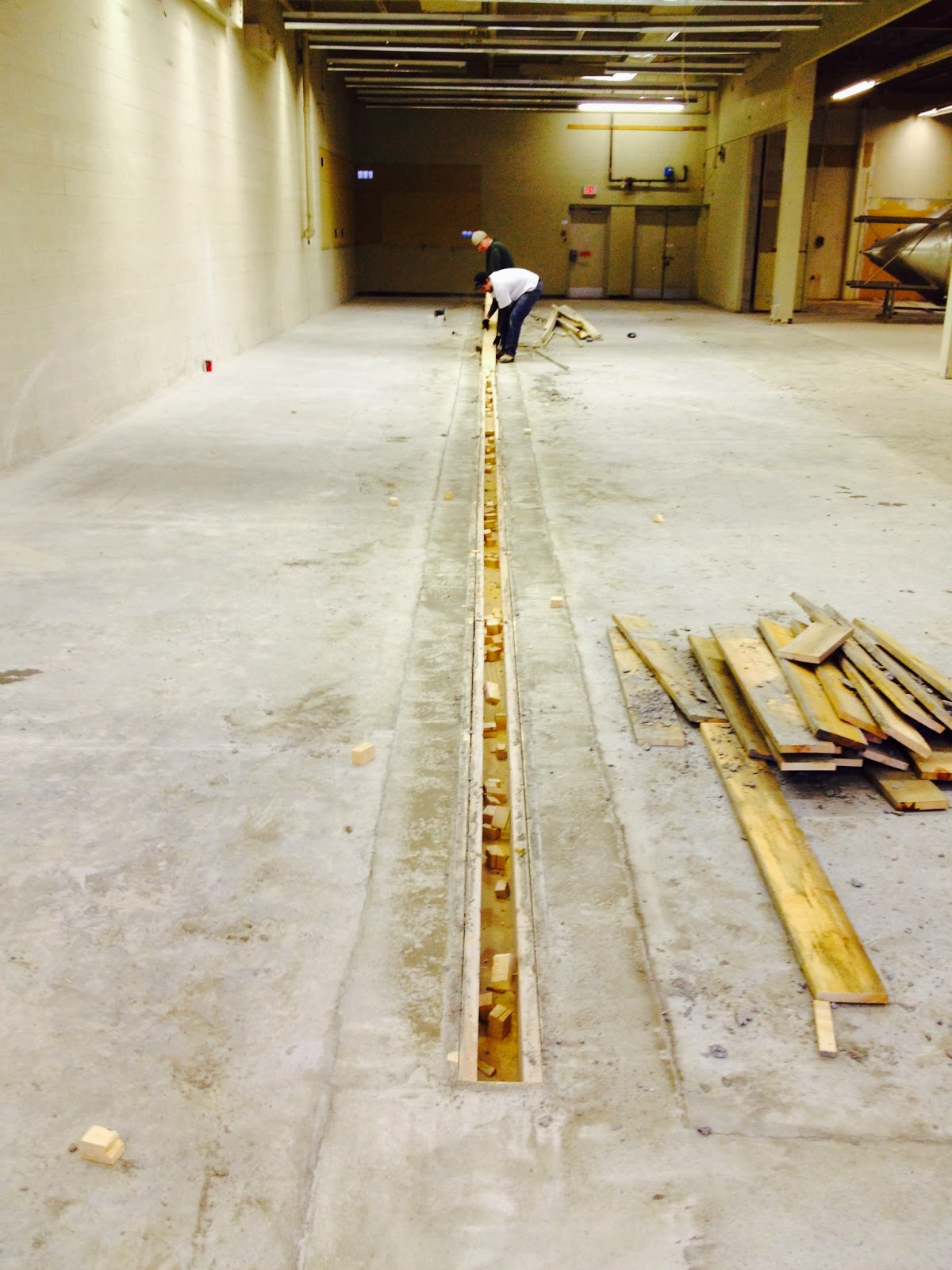 ...leaving us with our new, fully formed trench drains. 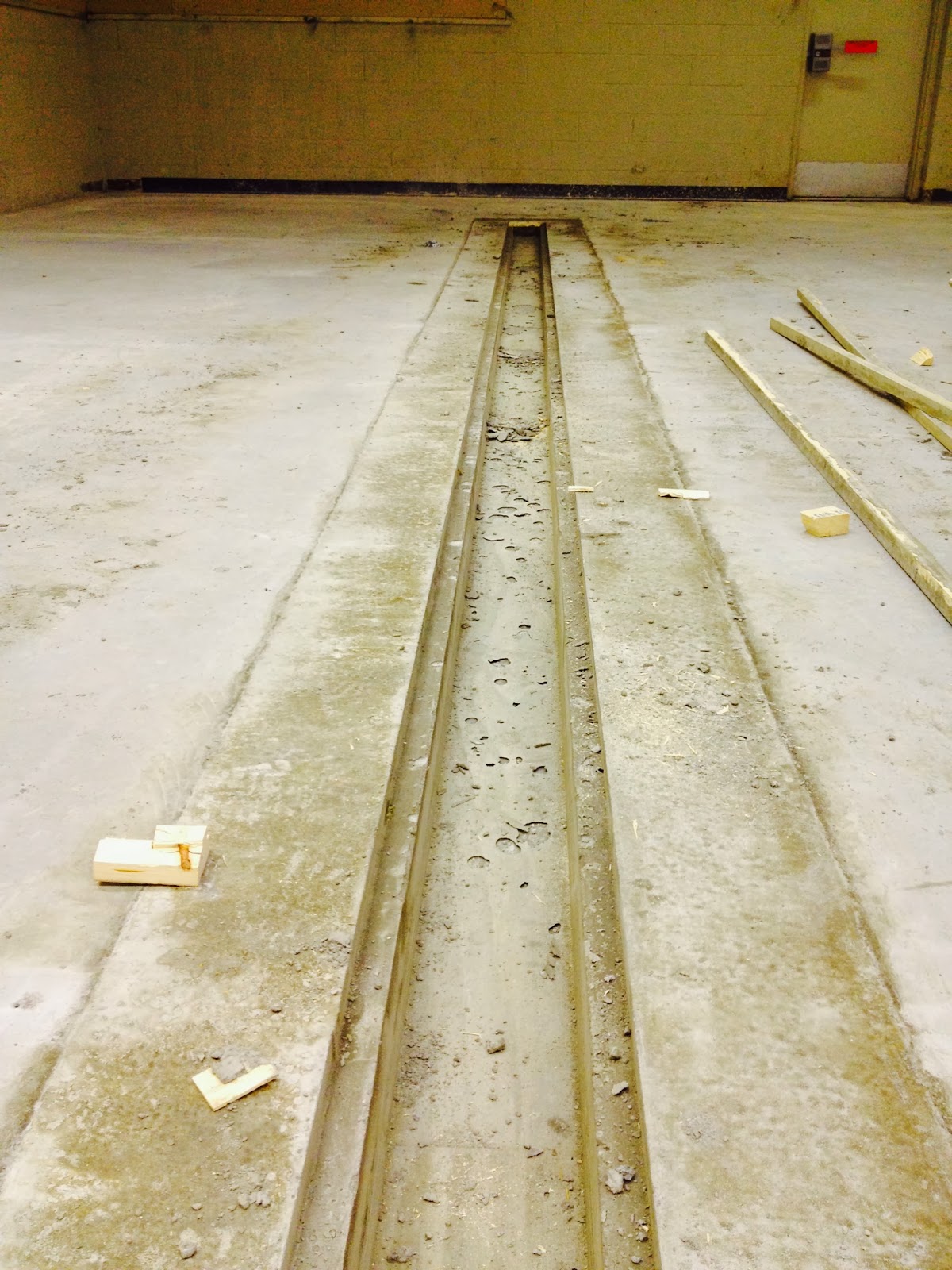 Now that we had our floors and trenches, it was time to prepare them for the epoxy coating. Why the epoxy you ask? Well, during any given day, the brewhouse floors are bombarded with near boiling hot water, cold water, caustic and acidic chemicals along with spent grain, yeast and other by products of the brewing process. This takes a sever toll on the floor. And in order to protect the floor and give it a long, healthy life, a coating is placed on top. The first step was to "scrape" the floors. This would give them a rough surface which would help bind the expoxy to the floor during application. This machine was run over the entire surface... 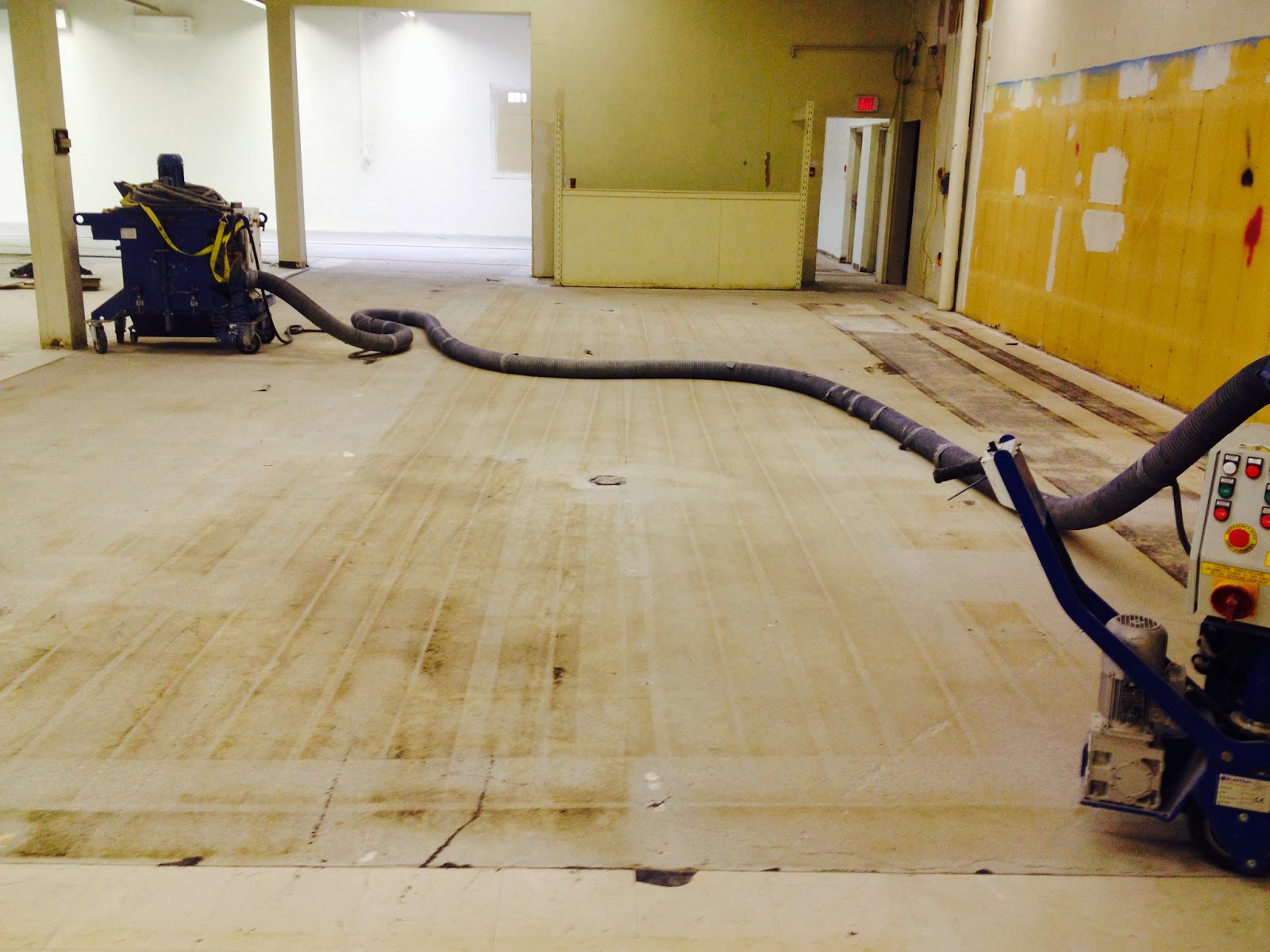 Leaving our floors rough and ready for the application of epoxy. 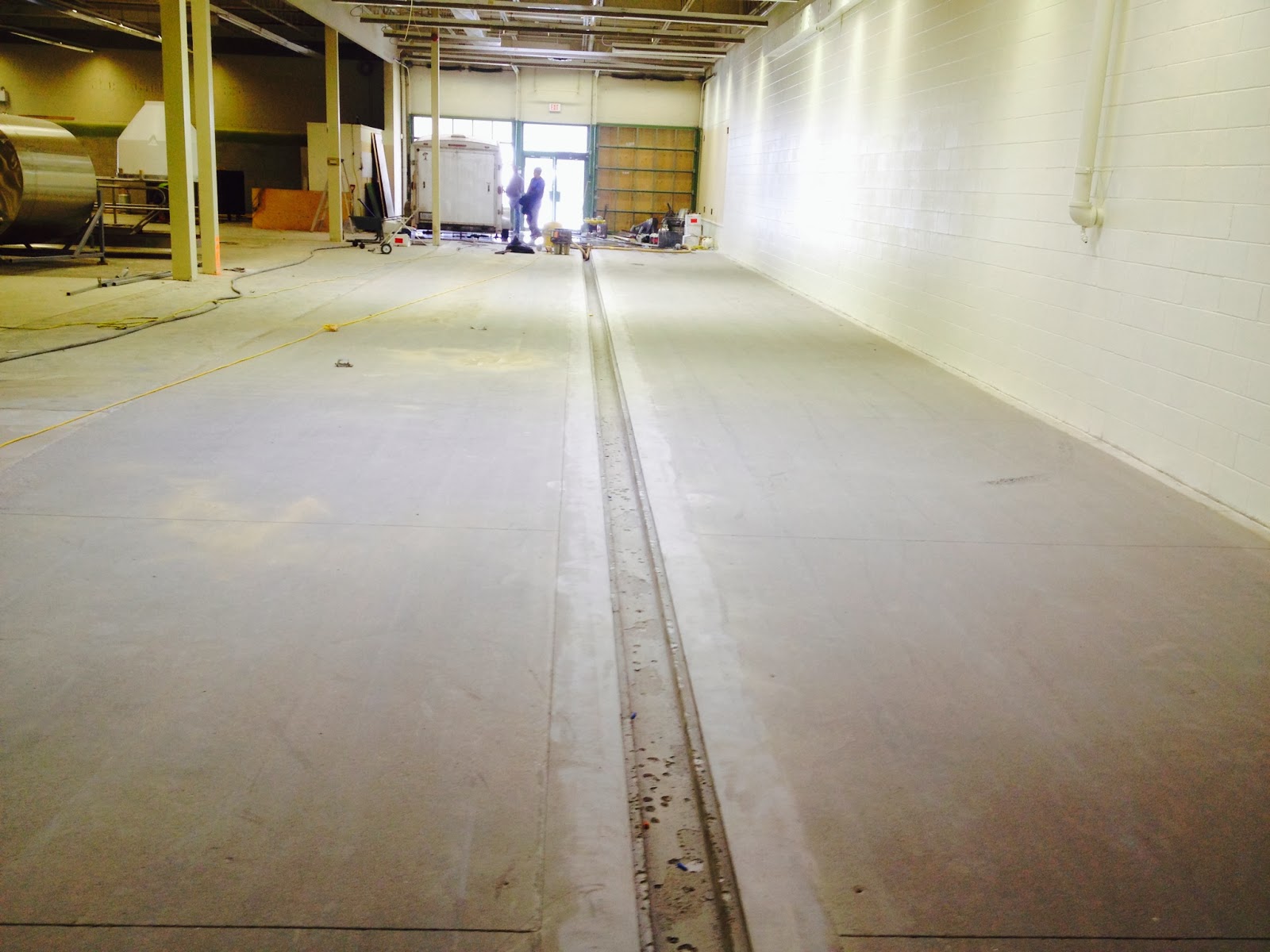 Along with doing the larger surface, the trenches needed to be prepared too. Here they are getting into each little area to make sure everything goes properly. 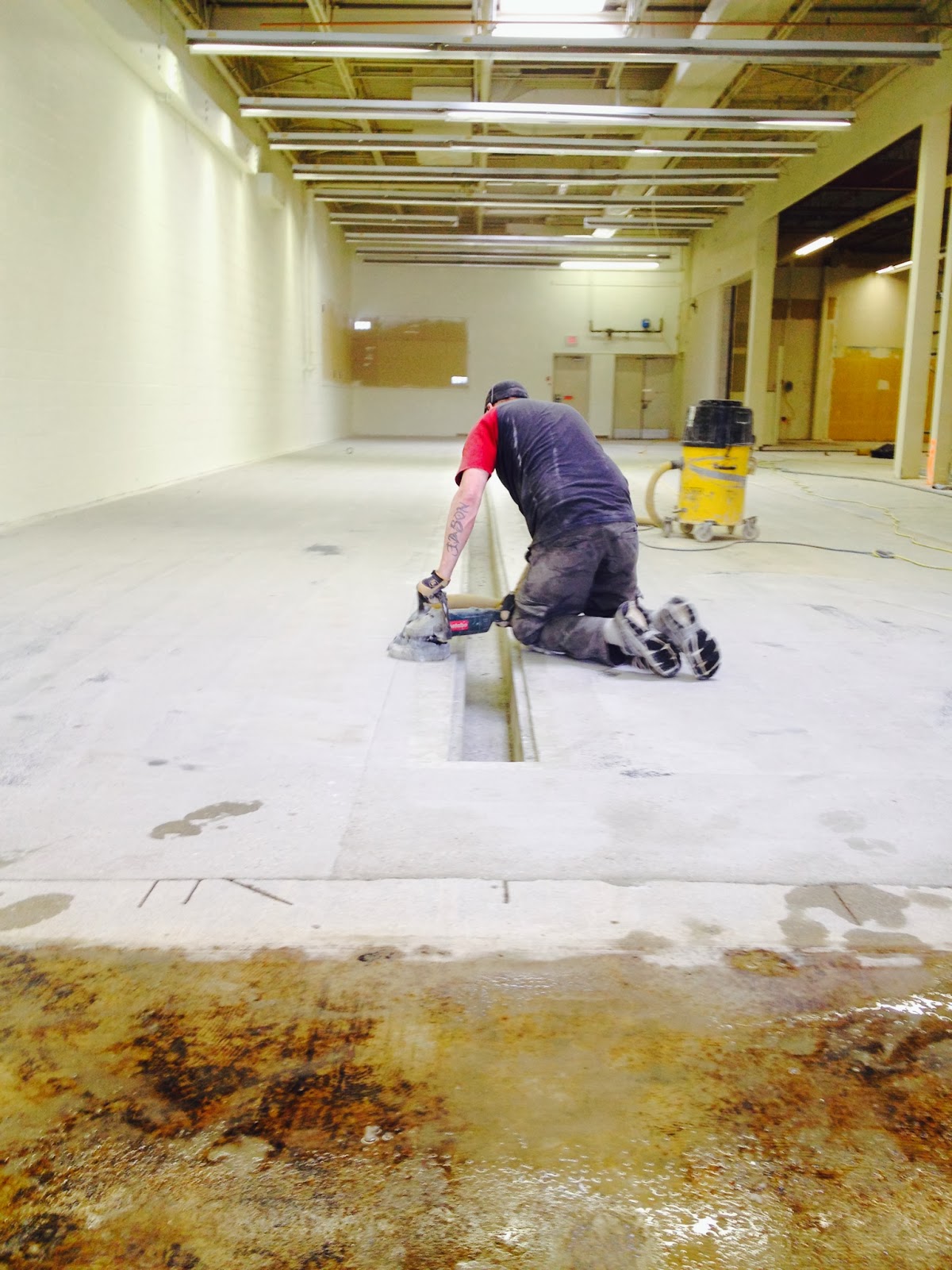 Once the entire floor and trench drain were prepared, the epoxy was applied. They started with the foot walls around the brewhouse, cellar and packaging hall. Then they applied the epoxy to the trenches. 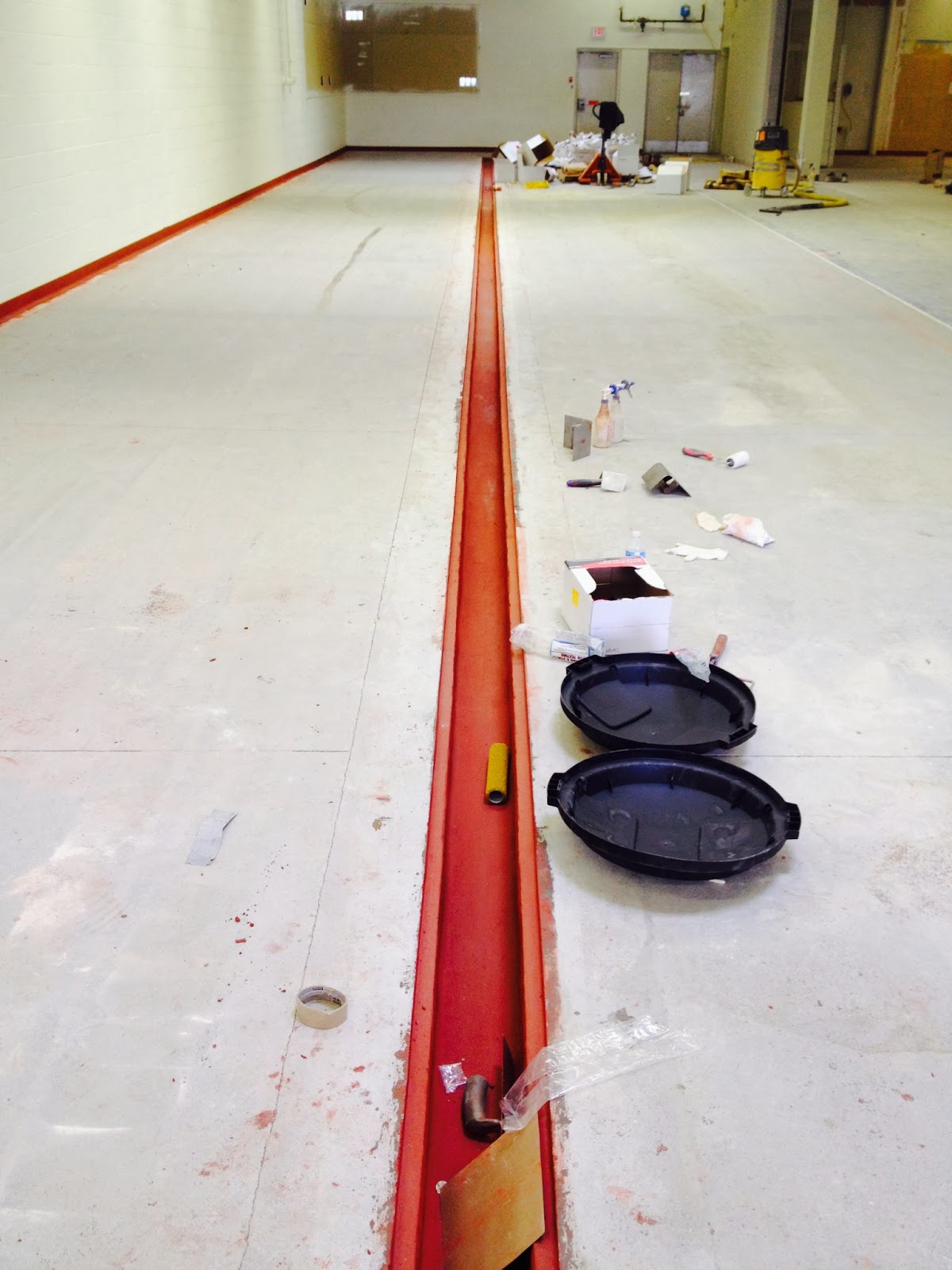 Next up was the packaging hall... 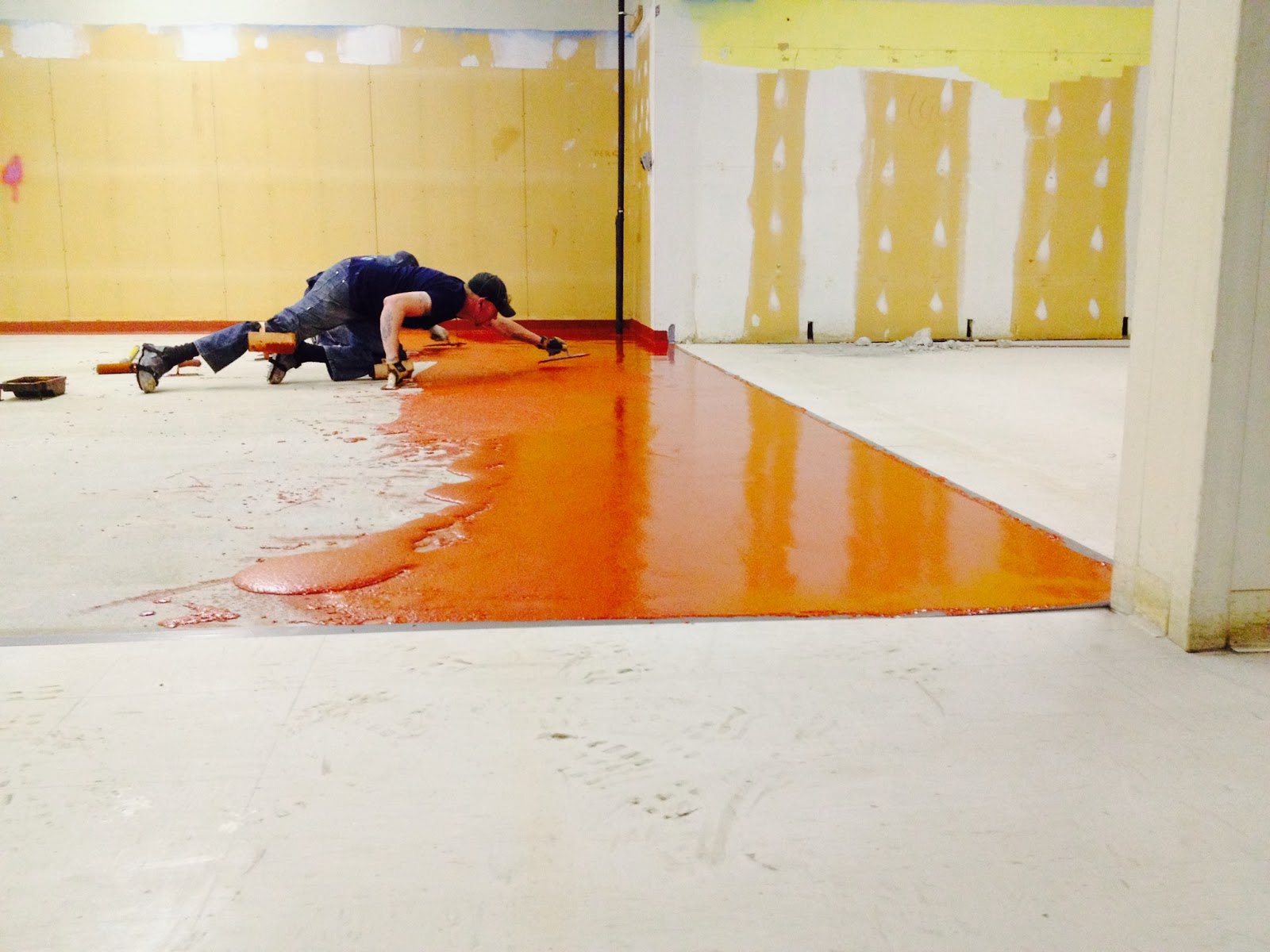 ...then lastly the brewhouse and cellar.  And here it is, with the epoxy applied. It now has to dry and cure for at least 48 hours before we can put any weight on it. 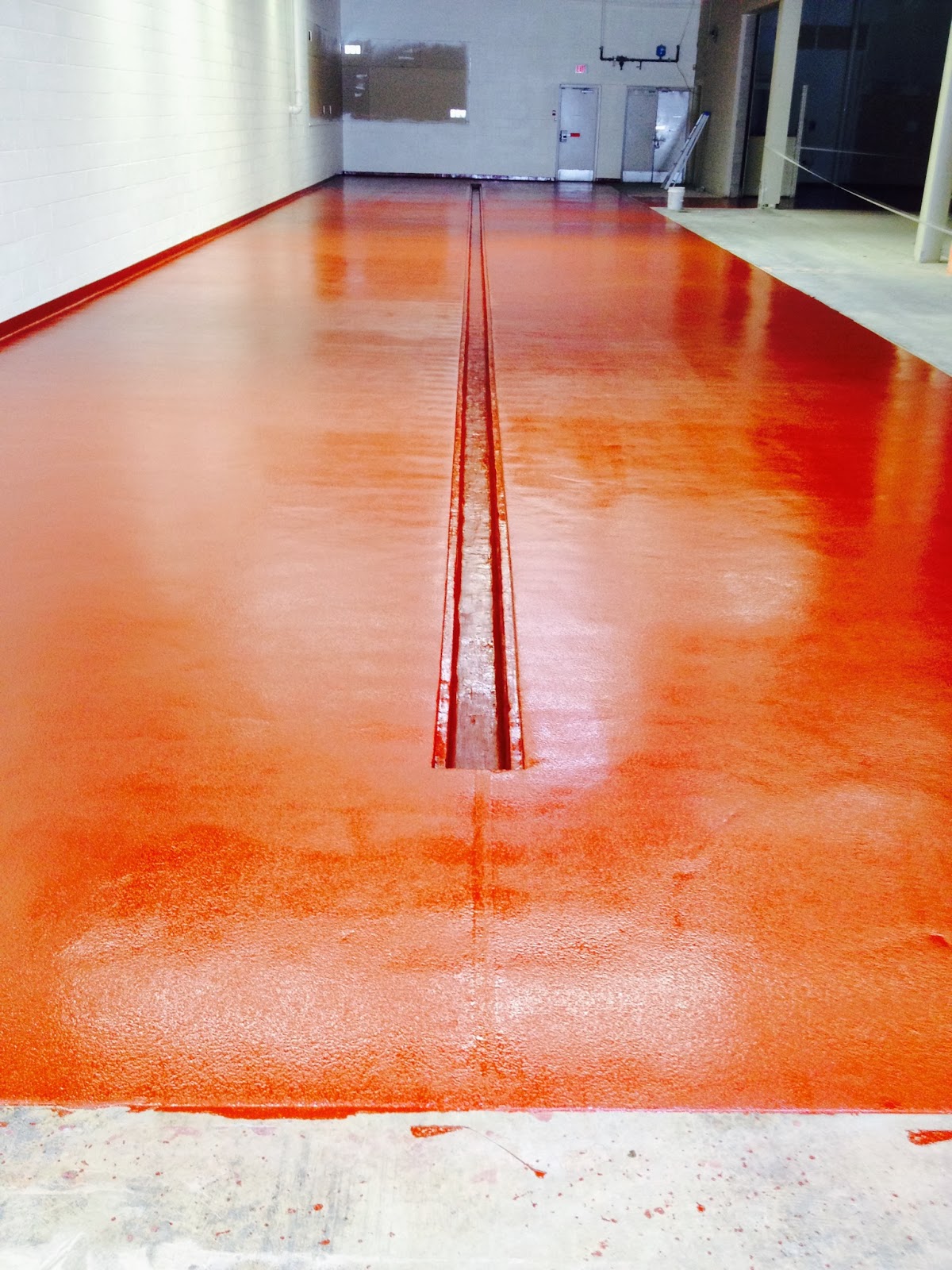 So there you have it folks, the evolution of our brewhouse floor. Pretty fantastic stuff if you ask me!  In the coming weeks, we'll have much more going on and hopefully I'll be able to share more build out information with you as we go along.  So keep an eye on this here blog, along with our Facebook, Twitter and Instagram pages for daily updates.

Anyhoo, that just about does it for now.  Until next time, keep the beer in your mugs and the Sawdust beneath your feet!